We at the Mind Sports Olympiad loudly affirm that Black Lives Matter. Recent events have been the catalyst for a long-overdue examination of the devastating legacy of colonialism and the inequalities that continue to pervade every aspect of our society. It’s now up to all of us to create a more just and equal society.

The Mind Sports Olympiad has always aimed to be as inclusive as possible. However, the board game community is still predominantly white and affluent. In order to be more accessible and also due to the financial hardships from the pandemic, this year’s MSO will have no entry fees. Furthermore, for our live streaming commentary team, we plan on hiring commentators from diverse backgrounds and ethnicities–especially Black voices–in order to promote a wide range of voices and role models.

Please do let us know if you would like to help and have any suggestions on how to make MSO more diverse and inclusive.

Black Lives Matter and we all have a role in shaping a more just and enlightened society.

PS~During the rest of the year, when I’m not organizing MSO, I’m a book publisher and also the proud founder of Repeater Books. Repeater’s mission is to challenge the status quo and fight for the oppressed. If you’re looking to better understand the Black Lives Matters movement, I highly recommend Terraformed by Joy White, Dispatches from the Vanguard by Patrick Howell, Darkly by Leila Taylor, and Decolonial Daughter by Lesley-Ann Brown. Terraformed was published last month and highlights the particular struggle in the UK. Dispatches from the Vanguard comes out in August.

August 6th was the Premiere of our documentary about the Pentamind World Championship. PENTAMIND tells the tale of this fiendish contest while exploring the heady world of competitive board gaming and the spell it casts over those who compete for love and glory.

The next screening is on Aug 20 at 12pm. Get your tickets while they last! Tony Buzan, the author of Mind Map Mastery, passed away on April 13, 2019, at the age of 76. He was the inventor of the Mind Map, the famous visual thinking tool that has been used by millions around the world. The Mind Map below illustrates Tony’s life. 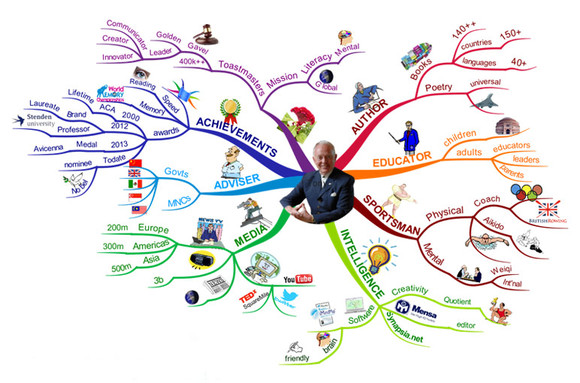 Tony’s curiosity knew no bounds and he was constantly seeking ways to improve himself and to inspire others. Born in London in 1942, his family moved to Vancouver in Canada when he was 12, and he received a joint honors degree in psychology, English, mathematics and general sciences from the University of British Columbia in 1964. During his studies, he realized that he could memorize and learn much faster by using a form of visual note-taking that was inspired by Leonard da Vinci and Joseph Novak’s concept mapping. In time he developed this technique into the Mind Map: a diagram that mimics the workings of the brain’s neural network through linked branches that allow ideas to evolve through the power of association. Tony discovered that using color and illustrations in Mind Maps was vital for engaging all our visual senses and maximizing memory. He himself was very colorful in his attire and had an excellent sense of fashion.

Ideas always came naturally to Tony and he also had the ability to inspire others to help him implement them. He was a co-founder of the Mind Sports Olympiad, of the World Memory Championships, and of London’s Mind Body Spirit Festival. He authored or co-authored more than 150 books, and he took Mind Maps a stage further through his popular iMindMap software. He edited the International Journal of Mensa and was nominated for a Nobel Prize.

Tony made a great contribution to the world during his lifetime, not least his belief that anyone can improve their memory, creativity, reading speed and spiritual intelligence. It’s a privilege to have published his last book, Mind Map Mastery, and to be part of his legacy. Here’s an interview I had with Tony a few years ago: Dan Holloway successfully defended his Speed Reading Championship title. He was able to read the newly published Implanted by Lauren Teffeau in 64 minutes. Implanted is almost 400 pages and has a word count of 108,838 implying that Dan’s raw speed was 1700 words per minute. He was closely followed by Christopher Fung (silver) and Nico Aslanidis (bronze). If you want to test your reading speed and comprehension, you can download the Implanted Speed Reading Questions. (Of course, you should first time how long it takes you to read the actual book). The annual Speed Reading Championship at the Mind Sports Olympiad is open to anyone and requires no prerequisite knowledge. A new work of fiction is presented each year and contestants try and read as fast as they can, and then answer a series of comprehension questions. Their raw reading speed is calculated based on the time that it took them to complete the novel and it is then multiplied times the percentage of correct answers to the comprehension questions. The competitor with the highest comprehended words per minute rate wins.